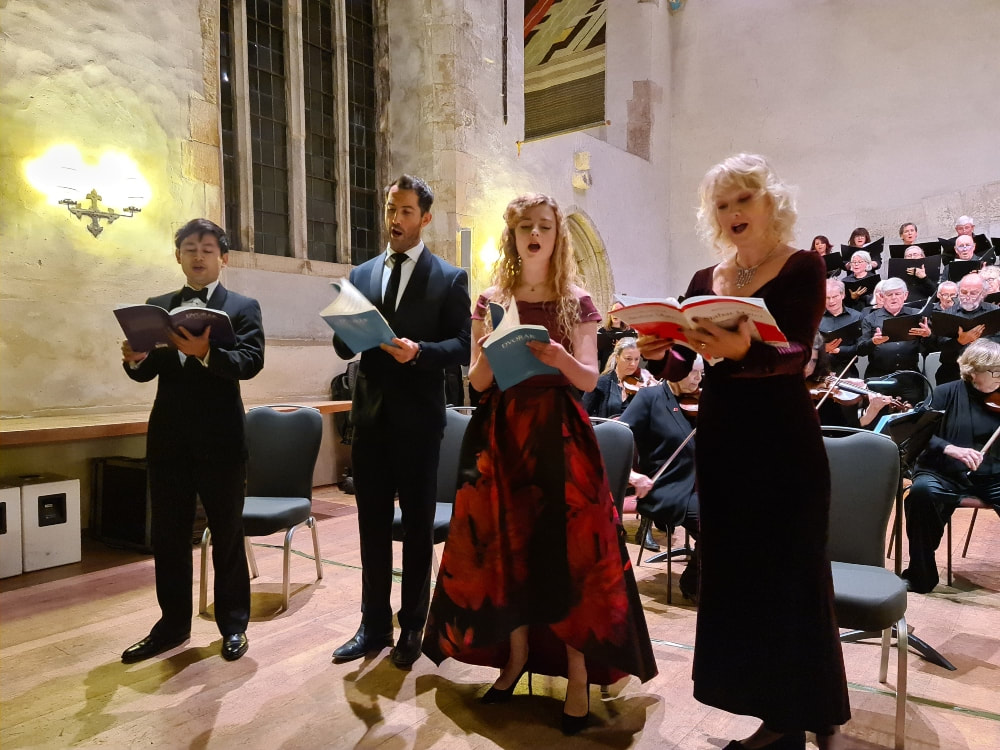 For two years the magnificent Great Hall on the Dartington Estate has been devoid of any large-scale musical performances because, like the rest of us when Covid began its onslaught on a global scale, life as we knew it was shut down, affecting each and every one of us, both in our homes, and in the myriad of activities we took part in outside.

Community
DCC indeed lives up to its name since you can always sense a unique community spirit in their presence. Although choir numbers are slightly down overall, it’s only to be expected, however effective virtual rehearsals via Zoom might be. Some of us might still not feel as confident in returning to such a social activity as choral singing, and are perhaps considering re-joining later. Others, sadly might well have succumbed to the virus, or have lost someone precious, and this will also impact on numbers.

Spirited
Choir numbers have naturally been affected by the events over the last two years, but the spirited Dartington Songsters have simply put all that behind them, in order to be back where they belong at the earliest opportunity, and still managed to turn in a performance in no way inferior to the best of what had been heard before – in fact, far from it.

Covid is still imposing further restrictions, and so, instead of being able to have the usual interval, the evening’s work – some 85 minutes or so – was literally given in one sitting. This was great news as far as the work was concerned, by avoiding a mid-way break in continuity, and the subsequent need to re-engage the audience after the interval, even if this might have posed something of a physical problem to some.

Remembrance
Given that this return to the Great Hall happened to coincide with Remembrance Sunday, the choir decided to dedicate their performance to the memory of all those lost friends and relations they had lost since they were last together, as well, of course, as those who had given their lives in the two World Wars, and later campaigns.

In terms of programme planning, there would have been a fair number of works that could have fit the bill emotionally and, of course, logistically. But the eventual choice for the evening proved such a simple solution, and one that would also tick every single box.

Ambience
Even in the twenty-first century, Dvořák’s best-known, and most-often-performed sacred work is his setting of the ‘Stabat Mater’. It is full of lovely tunes, but none of them hackneyed to the degree that some can become, with over-exposure. It has a pastoral, rural ambience, which ideally suits it to a performance set in the midst of some lovely Devon countryside. But at its heart, it relays those sentiments that we all can relate to, without all the somewhat impersonal pomp and show that more pretentious works sometimes thrive on.

Optimism
The fact that two years of life simply seemed to have simply disappeared last night is, in one sense, worrying, but there was also a real feeling of optimism that pervaded every bar of the music, and which was mirrored by the sheer enthusiasm, and total dedication of all those fortunate enough to be under the spell of Simon Capet’s truly inspirational direction.

Best of all though, there are already two concerts advertised for 2022, featuring a double offering of Bach and Handel next April, and then a really exciting offering in November, when the DCC presents two back-to-back performances of Dvořák’s ‘The Spectre’s Bride’ – God, and Covid willing, of course.

You can read my full review here at Seen and Heard International. 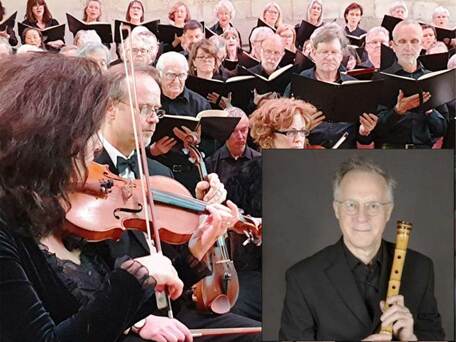 At the Great Hall with Dartington Community Choir…

It’s a good job we don’t all like the same things in life.

For example, whereas some choral-music aficionados prefer a single, large work in a programme, I enjoy having at least two contrasting pieces to listen to. Logistically-speaking, a single work should be easier to mount, since only one set of orchestral players and soloists is needed. On the other hand, two or more works could easily require vastly different resources, which would then seriously impact on their inclusion, if only from the financial standpoint alone.

The key, then, is to find pieces which go well together, but which essentially can be performed with the same, or very similar soloists and orchestration. Whether it’s anything to do with the centuries-old game of ‘Simon Says’, I’m not sure, but locally two of the past-masters in terms of successful programming have been Simon Ible – formerly director of the sorely-missed Ten Tors Orchestra, and the University of Plymouth Choral Society – and Simon Capet, conductor and artistic director of Dartington Community Choir (DCC).

DCC’s previous concert was a perfect example of successful pairing, where Ryba’s Czech Christmas Mass provided the ideal first-half foil for Handel’s Dixit Dominus in the second – works as different as chalk and cheese, but which combined seamlessly on the night.

Following their festive success, DCC have followed suit at their Easter Concert, this time juxtaposing two Requiems – one by Maurice Duruflé, and the other by Karl Jenkins – again almost diametrically-opposite creations, but which were still amazingly effective together.

Whether it’s a company or organisation, orchestra or choral society – or even the current Brexit fiasco – so much depends on the person at the helm, for there to be an ultimately satisfying, and successful outcome.

DCC is enormously fortunate to have Simon Capet as its leader. Yes, there are directors who have the necessary musical knowledge and expertise, and even most of the skills to communicate this to those in their charge. But far fewer have that vital charisma, and this is where Simon has been a clear inspiration since taking over the choir, which now exudes a real air of pre-concert confidence, though never appearing the slightest bit blasé about the task ahead. Simon, for his part, outwardly appears the height of calmness on the rostrum, and this is surely the most reassuring sight any large group of performers can wish to have standing in front of them.

The choir was, as ever, in good voice, well-drilled and disciplined, yet always projecting a great feeling of spontaneity and real enthusiasm. It was a particular pleasure to see former choir chair, Matt Hulbert, assume the baritone-solo role in the Duruflé. Yes, it was definitely more cost-effective to provide this in-house, rather than hire a second soloist for what was, in reality, a relatively short contribution, but Matt stepped up, and, having had tuition from Totnes-based former opera-singer Ian Comboy, did a first-class job on the night. Welsh soprano, Charlotte Forfar was an ideal choice for the repertoire, too, where her bell-like clarity was absolutely ideal for the role.

Dartington Sinfonietta also did a superb job, and it was good to see some different personnel among the ranks, given that some of the regular players were no doubt booked for a similar choral event elsewhere. To this end, violinist Lindsay Braga deserves a special accolade for her assured lead, and there were equally some especially-telling contributions from harp, solo horn, and percussion, the latter courtesy of two members of Quartet19, who had already made a great impact when they appeared with the choir in Carmina Burana, a while back. Peter King’s superb organ playing was additionally another one of the first-half highlights.

Finally, a special commendation must go to shakuhachi exponent, Clive Bell [pictured above, inset], for the unique and wide-ranging sonorities he produced on his Japanese flute, allied to his totally atmospheric and idiomatic playing, without which some of the effectiveness of the Jenkins work would have been considerably diminished.

I make no secret of the fact that Dartington, and the Great Hall in particular, is one of my favourite concert venues, and, when the music-making is as enjoyable as this was, there can be little reason to feel the need to be elsewhere.

You can read my full review here at Seen and Heard International.

​​Dartington Community Choir and Sinfonietta create new Christmas memories
​​
I have to say I love Handel’s Messiah as much as the next man, and never tire of hearing its all-so-familiar mix of stunning choruses and attractive arias.

But, rather like the traditional turkey dinner, it’s not an absolutely essential part of the festive season’s proceedings, and, like anything, you tend to appreciate it more, when you’ve had a break for a while.

With conductor Simon Capet, Dartington Community Choir (DCC) is so fortunate in having not only an expert musician at its helm, but also a real motivator whom the singers respect, and so easily relate to – something that unfortunately doesn’t always go hand-in-hand.

Rather than coming up with another helping of Messiah, Simon chose the far-more-compact, but really-challenging Dixit Dominus – a work that would equally tax the capabilities of a smaller chamber choir of professional status, as a non-auditioned community choir, who sing because they enjoy it.

But that, of course, is the key to DCC’s ongoing and ever-burgeoning success. It’s amazing what you can achieve when you really want to pull out all the strings and give 100% commitment to the cause.

The opening work, on the other hand – Ryba’s Czech Christmas Mass – was the complete opposite. Essentially really quite simple, every movement in a ‘happy’ major’ key, and very much modelled on Haydn’s religious philosophy of not always having to be morose and suitably serious to sing praises to God – cheerful and light-hearted music can do it just as well, and really rather better, too.

True, the Ryba wasn’t deemed as overly challenging – unless the challenge was to try to keep a straight face while some of the lovely little pastoral tunes and catchy melodies were being played out by the orchestra. But again it was the sum of all the parts that made this Christmas programme as a whole so appealingly entertaining, simply oozing true Christmas spirit from start to finish.

Of course, once the New Year begins, echoes of Ryba and Dixit Dominus will all seem but a distant memory for the choir-members, as they start rehearsing for their April concert – and where Requiems by Duruflé and Karl Jenkins will be the order of the day. But Simon tells me he has something special up his sleeve – in the shape of a Japanese Shakuhachi – but more about this later.

Meanwhile, for the audience, strains of the Christmas Concert will surely still be echoing around the Great Hall rafters for some considerable time to come.

You can read my full review of the present concert here at Seen and Heard International.